We try to propose variety on this site, and to renew from time to time the texts. But we're never safe from theft or plagiarism by other French or foreign webmasters, bloggers, Wikipedia... and something rare or unique at first becomes a banality. We do not run after praises so we don't really intervene (especially since some of the contents here is illegal as well), but please, write down your sources when you write a page using our contents, even a small line is enough, in order to respect all the hours of work provided by others on the web. After all, Angel Sword counts no less than 90 pages.

Any reproduction, even partial, of the texts from this site is prohibited. All rights reserved to www.angelsword.net, except for press articles which belong to their authors.

Our creations (skins and wallpapers)

Belong to us. You can download them for private use. If you want to spread them over internet, you must ask us first, then write that they come from www.angelsword.net.

Belong to their respective creators. In no way can you use them on your site or another one without their consent (contact us about it first).

elong to their respective creators. Usage of dollz on internet works through "adoptions": you have to create on your site a special area dedicated to dollz display and indicate all the credits requested by the owner (their conditions are usually explained on their site). You can not use them in your template or as an avatar, unless the creator is OK with it. If any doubt, it's always better to write to them.

Kiss dolls games that are downloadable here have been uploaded upon consent of their creators. If you want to propose them on your site too, please ask them first, bear in mind that the work to create a Kiss (.LZH file) is just huge.

Intrinsically mp3s are illegal. We propose them here as a discovery, hoping that you will buy CDs later on. You can reuse our mp3 (well, "ogg" rather) and propose them on your site... We would greatly appreciate being credited.
MIDI files have been transcribed by your webmiss Leguman and are totally free to use and broadcast.

Why offering so many wallpapers on this site, rather than just giving links to other wallpapers sites? Well it's probably a silly looking hobby, a collection of fanstuff... but you could also consider this as a back-up of the web, indeed many of the older wallpapers presented here have already disappeared everywhere else from internet.
For property questions, this activity is questionable, because even if we give the url and creators names, we could not ask for permission to everybody... So we avoided putting all of the creations of an author or from a site, in order to encourage you to visit it.

Angel Sword is a site of a certain age already. Grandpa is 16 years old after all!

The site was uploaded on June 22, 2001. The-Buzz and Leguman (I) worked hard during summer holidays to create a site from scratch, in basic HTML with frames, using Dreamweaver 3 at the time. The address then was http://angelsanctuary.free.fr, with 100 MB of free storage. But after a few months only, while the site had been rewarded with the "label Free"

by our free hosting provider, they threaten us to close the account due to heavy traffic (number of hits): large images to be transferred, many thumbnails to load and theft of bandwidth, very common in early 2000 are the culprits. Host services at that time were not the same...
We must then quickly migrate the site elsewhere. It reappers under a new domain name that we buy, on a paid server of... 250 MB: so www.angelsword.net is born on January 10, 2002. The site switches to version 2 the following summer, on August 4, 2002 and becomes blue-grey. It gets richer with various content and becomes progressively bilingual.

November 2, 2003 is a turning point: the site is completely remade in PHP by a close budding webmaster, and the English pages now form a mirror site which can be accessed from any page. Leguman's tastes are not that appealing to the-Buzz, who has to make the site (very) purple! The fanbase is active and several contests and polls are run, the forum is regularly used, the bilingual specificity of the site bring foreign visitors who send their fanarts en masse, the site has a high hits rate. That's the climax!
We're switching to version 4 a year later, on November 19, 2004. This is a good pace to change layout and visual rules are not yet widespread on the web, we use CSS bits not logically, we are still learning... But the virtuous circle breaks little by little: there are fewer active fans since the end of the manga (last French tome dated July 25, 2003), my first job contract in 2005... In 2006 the site is abandoned by its two webmasters! My free time becomes precious and I am more focused on my second site, which grows bigger: A Yuki Kaori Shrine. The French publisher Tonkam had planned to release the entire work of Kaori Yuki, there was just so much to do and to review!

As of 2009, hosting problems are re-emerging, and we are not very reactive enough to correct errors. We permanently lose some files including the OVA episode 1, which also disappeared from my pc following a very unfortunate crash. Luckily, all the fanarts survived thanks to an old backup on an old hard drive that was safely stored in a shoe box. In September 2015 the php code is obsolete and failing, after an update of the web host the site can no longer be displayed normally. The-Buzz is no longer in the game either. The site closes "temporarily" but having become young mommy I really don't have time to scoure the dinosaur...

Several people contacted me, worried about the fate of the site. I guess the mass of content gathered here is consistent and its absence has been noticed. Proof that the ephemerity of internet can affect any site...
Finally, I sacrificed a lot of evenings (way too many) to adapt a free responsive template to my taste, and much efforts plus a moving to another town later... I have this time created a completely new layout and dusted more than 100 pages (actually 100 x 2 counting the English version). I have merged some pages (artbooks, OVA, multimedia, characters, dollz, fanarts, wallpapers...), deleted others (services: awards, virtual cards, chat, guestbook, polls, stats, webring), created some new ones (interviews, added pending fanfics, sitemap, French new covers). Overall there are fewer pages than before and the information is sorted in a smarter way.

October 4, 2017: woot version 5! Inspired in Art Nouveau (it was my fad in 2016), the site is responsive in order to meet the modern practices of reading on smartphone. It is bound to stay like this for quite a while because I don't really have time to take care of it. At best I would add a fanart, a new image, cover or some product from time to time. The site changed 6 times of host since 2001, we will see if the current one - ovh.com - is the right one! Meh the web and its perpetual evolution...

Back then, one way to federate webmasters was to offer awards to affiliates or friends sites, sharing a same topic, etc. thereby consolidating a community and improving navigation between sites with similar interests, building a network of quality. 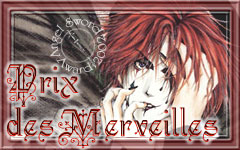 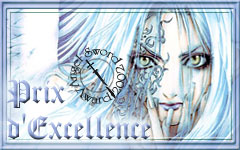 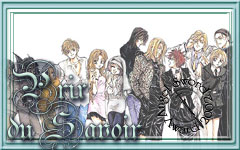 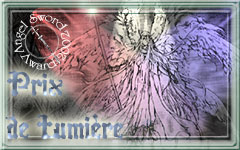 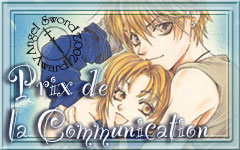 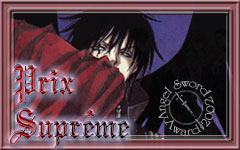 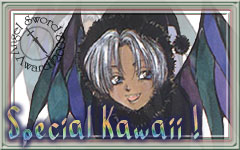 1. Merveilles / Wonder: focuses on the aesthetic and technical aspects of the site (elegance, graphic charter, respect to the atmosphere of the manga / use of frames, css, php, javascript...).
2. Excellence: focuses on the quality of information (relevance, precision, understandability, spoilers).
3. Savoir / Knowledge: relates to the amount of information (length of explanations, number of sections, of links listed).
4. Lumière / Light: focuses on clarity of the site (ergonomics, loading time, no 404 errors, clear sitemap).
5. Communication: focuses on the interactivity of the site (guestbook, forum, chat, surveys, newsletter...).
6. Suprême: gathers the 5 awards above. The lucky webmaster who is awarded this one has the choice between presenting the 5 awards on his site or only this one, knowing it's a rare one. ;)
Special Kawaii: bonus award, related to particularly cute designs...

Thanks to all of you who so nicely gave us these award! Leguman & The-Buzz. 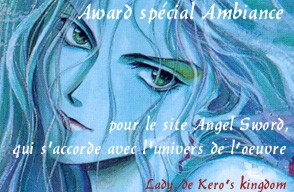 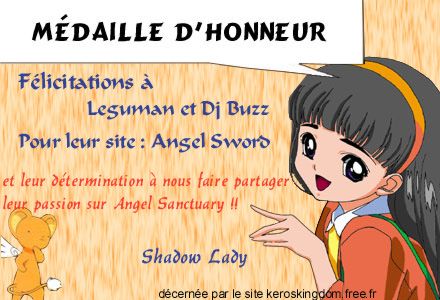 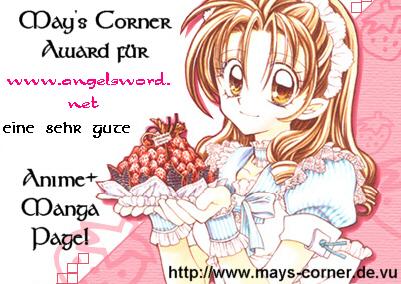 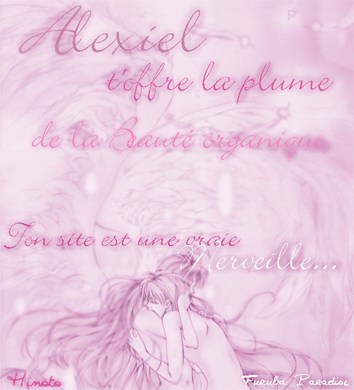 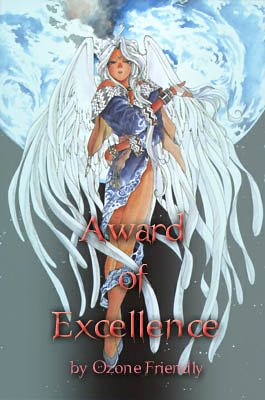 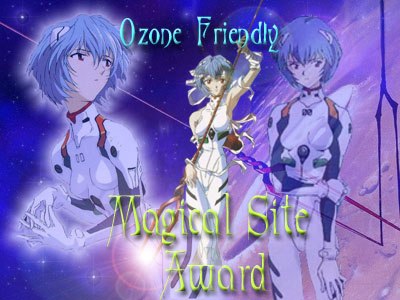 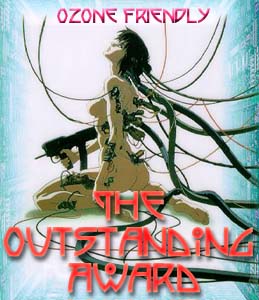 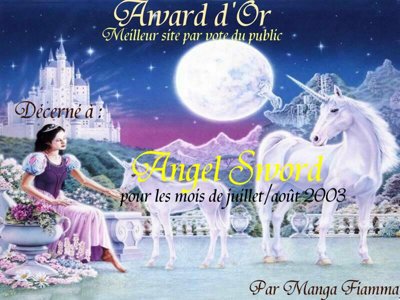 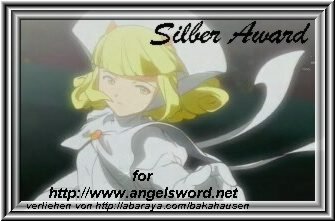 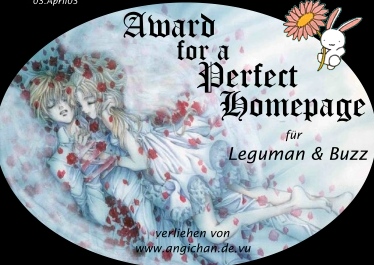